Manifesto: One Bold Step to Lead Your Team to Higher Levels 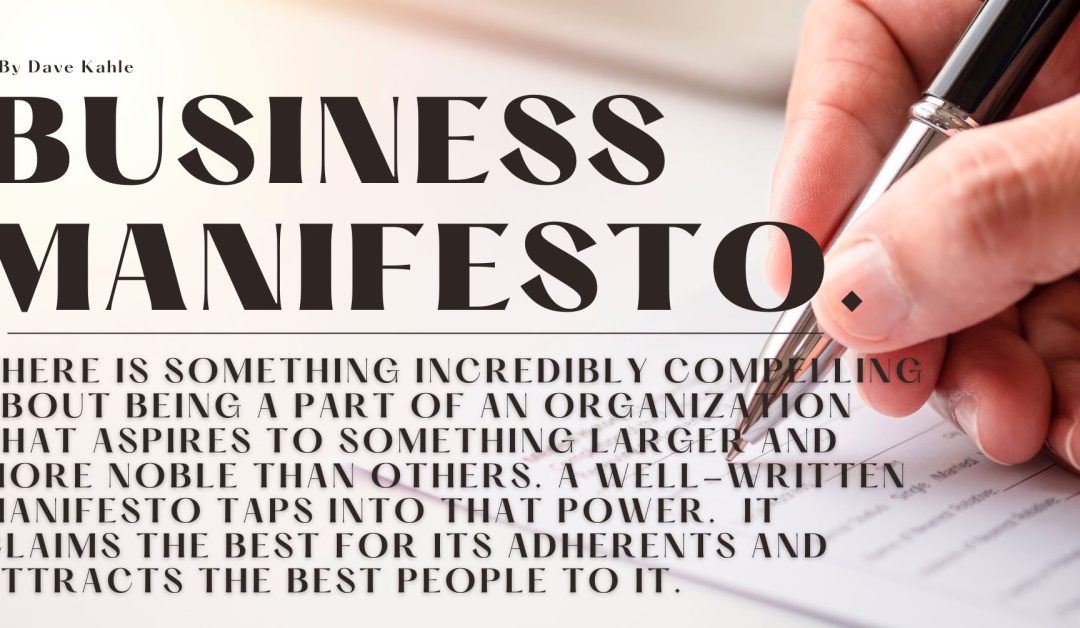 Are you looking for a way to unite your team, to unleash their potential, to shape your culture and to move your business or department up to a higher level of performance? Consider adopting a manifesto.

Probably the most well-know is the Declaration of Independence, which begins with these words:

We hold these truths to be self-evident, that all men are created equal, that they are endowed by their Creator with certain unalienable Rights, that among these are Life, Liberty and the pursuit of         Happiness.–That to secure these rights, Governments are instituted among Men, deriving their          just powers from the consent of the governed,…

A manifesto is often the output of some deep thought and lots of discussion, so the process of creating a manifesto is time-consuming, and often involves more than one person. The Declaration of Independence is a good example.  While it was written by one person –Thomas Jefferson —  he worked with a small team and captured, combined and clarified the thoughts of the assembly.

A manifesto deals with important issues and is not trivial.  In the case of the Declaration of Independence, it was laying the foundation for the actions of an entire nation. In our times, a manifesto often deals with the actions of a company, an organization, or the career of an individual. These are big issues worthy of careful consideration.

A manifesto claims its power and credibility as emanating from a higher source. Our Declaration states, for example: that they are endowed by their Creator with certain unalienable Rights, So, the Declaration of Independence cites God as the source of the truths which are then delineated.   Manifestos in our age can gather additional power by connecting to truths which are ultimately Biblical in origin.

A manifesto is not made to be hidden.  Because it is a declaration, it is designed to be shared with those to whom it is declaring. A business manifesto, for example, is designed to declare certain principles and beliefs to its employees, customers and vendors. It is best displayed wherever those people would see it:  On the website, social media sites, hanging in the lunchroom, in a prominent place in the lobby, etc.

Finally, a manifesto appeals to the higher and best instincts of those to whom it refers.  Those who commit to a manifesto aspire to principals and beliefs that make them better people and that raise an organization out of the muddle of the mediocre.

See a sample manifesto at the end of this article.

The time is right

Everyone understands that we are living in an unprecedented, turbulent environment.  The world is hungry for leaders who will make sense of this turbulent environment and provide an anchor to which to connect.  When it feels like everything is in motion and unsteady – the government, education system, health care, our jobs — it is reassuring to find something that doesn’t change, that provides stability in a day-to-day, assessable way. Manifestos influence an employee’s behavior and set expectations for customers and vendors. It’s power touches people every day.

Because a manifesto declares principals and beliefs which have been validated by centuries of mankind’s experiences, it provides that anchor around which the waves of social media, media bias, emotional decision-making and mob thinking harmlessly bounce.

The declaration of a manifesto is not for everyone.

The world of business is with average performers who drift with the ebb and flow of events and people around them.  Like the foam on the top of waves, they ride with the currents moving around and underneath them. A few – typically five to twenty percent — stand out because they take a stand, point the way forward, and lead.  These folks have the strength of character and internal resolve to shape the direction of the currents instead of being led by them.

It takes courage and conviction to adopt a manifesto.   In a world where the social media mavens can erupt and conspire to ‘cancel’ you for one inappropriate word, those leaders and professionals who adopt and then distribute their manifestos have the courage to stand up for core beliefs and principles regardless of the criticisms they may encounter.

There is a well-known Biblical quote which typifies this attitude.  The Israelites have left Egypt and are on the verge of taking over the “promised land.”  Moses has passed away, and Joshua is now leading the Israelite nation.  At a critical moment, Joshua declares, “As for me and my house, we will follow the Lord.”  (Read Joshua 24:15)

That’s the idea.  Regardless of what is happening around you, the courageous leader takes a stand and sticks to it.  “As for me and this organization, we will adhere to our manifesto.”

The manifesto impacts people and shapes the future of the organization.

A well-written manifesto taps into that power.  It claims the best for its adherents and attracts the best people to it.

Adopting a powerful manifesto is a powerful act of wise and courageous leadership. It can be a watershed event in the life of an organization, and the career of a professional.

You don’t have to create your own manifesto

1.  We value and respect all our stakeholders – employees, customers, vendors, and their families – as valuable and worthwhile human beings.

2.  We are cognizant of our influence, and proactively work to have a positive impact on the communities we serve, above and beyond just making money.

3.  We are honest in marketing, sales, financial management and reporting.

5.  We are conservative in borrowing.

6.  We pursue excellence in all we do.

7.  We adhere to ethical principles without compromise.

8.  We are proactive and generous in giving – money, time and talents.

10.  We constantly pursue continuous improvement, both individually and organizationally.