A Lesson for Christian Companies from the Disney Debacle 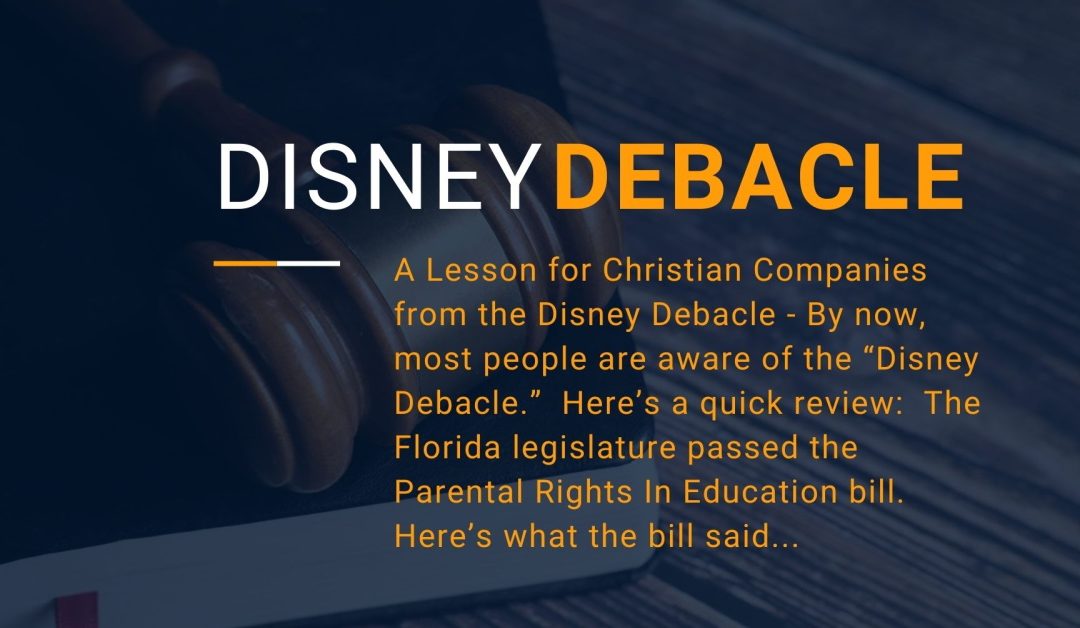 By now, most people are aware of the “Disney Debacle.”  Here’s a quick review:  The Florida legislature passed the Parental Rights In Education bill.  Here’s what the bill said:

Some advocates for the LGBTQ community seized on the section of the bill that prohibits teaching sex orientation to children in kindergarten through third grade, and condemned it, calling it the Don’t say Gay bill.

That, of course, caused a furor among social media as people reacted to the catch phrase.  The Disney corporation then decided that it did not want to have anything stand in the way of teaching sexual orientation to kindergarteners  and came out publicly in opposition to the bill.

It turns out that the Disney Corporation was enjoying a unique and preferred situation in Florida.  In 1967 the legislature created a special district that allowed Disney to govern itself, instead of being subject to the rules and authority of the local government. (Reedy Creek Improvement District) (2).

The Florida Legislature, in reaction to Disney’s position, passed a bill to eliminate the special district.

This article is not about the pros and cons of the bill, nor about the Florida legislature, nor about the position of the Disney Corporation.  It is about a lesson we can learn from this sequence.

The most common motivation for this decision is fear.  They are afraid of the repercussions from their employees, from their customers and from their vendors.  They believe that if they were to stand up for Christian values and use their position of influence to advocate for Christ, Christian values and Christian principles, they would be ridiculed by some and potentially hurt economically. And so they remain silent.

Contrast that position to the actions of the Disney Corporation.  Again, the focus of this article in not on the position that Disney took, but rather on the fact that they took a position.

And, while they probably didn’t consider the possibility of losing their special status, their actions will cost them billions in reduced revenue from parents boycotting them, as well as the unexpected costs of losing their self-governing position.  They have lost one key executive, and who knows how many other employees have left or will leave because they oppose their employer’s position.

There is a lesson in this scenario for Christian business owners.  Look beyond an emotional reaction to the position that Disney took, and consider the fact that they took a stand.  It was a controversial stand and may have been done in ignorance to what the bill actually said.  And they will continue to suffer the consequences of that stand: loss of some of their customer base, loss of their special status, lack of respect from many of their employees, and an injured brand image.

All of that said, they will emerge intact on the other side of this.  Folks will continue to watch Disney movies and stand in line for hours at the Disney resorts.  Life, at Disney, will continue, albeit a bit more damaged than before.

What would our world be like if that changed?  What would be the impact of thousands of Christian businesses standing up for their faith in the marketplace?

It may be time to shed the cloak of anonymity that most Christian businesspeople embrace and begin to verbalize your faith.  If Disney can do it, can you?