Q & A for Salespeople: Dropping the ball with a customer 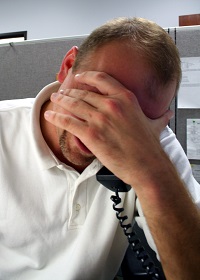 If you dropped the ball with a customer, how can you redeem their trust again?

By “dropped the ball”, you can be referring to two different situations.  First, it was your company who messed up.  Your company didn’t fulfill the promises you made.  Or, second, it was you, personally.  You didn’t do what you said you would do, or you somehow personally violated the customer’s expectations for you.  Regardless, the remedy is similar.

You do that first, because that eases the tension in the situation and acknowledges the impact on the customer.  Remember, you are building a relationship with these people, and, as in all relationships, sometimes things don’t go quite right.  An apology is a great way to clear the air.  Most people will tend to accept your apology and not hold it against you.  Everyone makes mistakes.

Now comes the hard part.  While most people will accept your apology, they won’t necessarily forget the infraction.  It’s like catching one of your teenagers smoking dope.  He may ask for your forgiveness, and you may give it, but it is prudent for you to watch him carefully for the next few years.  You can forgive, but you are wise to not forget.

Same thing with your customers.  It’s one thing to forgive, it’s another to forget.  They won’t forget quickly or easily.  So you have to earn their trust back by your actions, not your words.  You’ve got to consistently do what you say you are going to do.  Your company must, time after time, do what you say they will do.

Some years ago I came across a study that looked at two common selling situations.  In one, a customer bought from a vendor for the first time.  The order was received on time, and everything was in order and as it should be.  In the  second situation, the customer bought for the first time, but there was a problem with the order.  The salesperson apologized, and did what he/she could do to fix the problem.

The study then looked at which of the two sets of customers were most likely to order again. Interestingly, the second set of customers – those where there was a problem – were much more likely to re-order.

At first glance that defies conventional wisdom.  However, if you think about it a bit deeper, particularly from the standpoint of the customer’s risk, the companies in the second scenario were less risk for the customer going forward.  Now, the customer knew how the company and sales person would respond to a ‘worst case scenario.’  They were, therefore, a lower risk decision going forward.

Secondly, the act of inquiring into the customer’s satisfaction, apologizing it, and fixing it all led to a greater relationship with the customer.

The moral to this story is that ‘dropping the ball’ is not nearly as traumatic in the long-term as you may think in the short term – providing you handle it correctly.

Regaining trust is, in most cases, a long term project.  It’s much easer to lose a customer’s trust than it is to gain it.  Your actions, consistent and reliable, backed up by your heartfelt interest in the customer, will, over time, win them back.